GIVE $25 TO SUPPORT JUSTIN OLSON'S CAMPAIGN >> 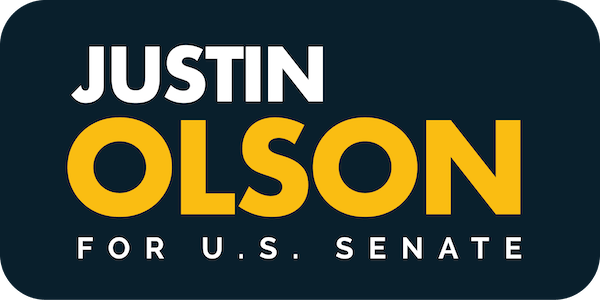 JUSTIN OLSON FOR US SENATE

Justin Olson was born and raised in Arizona where his family’s roots go back many generations. He and his wife, Karyn, are the parents of four daughters and five boys.

Justin holds a Masters of Business Administration in Finance from the W.P. Carey School of Business at Arizona State University.
‍
The unprecedented budget crisis Arizona faced in 2010 motivated Justin to run for the Arizona State House of Representatives pledging to balance the budget with no new debt, no new taxes, and no budget gimmicks. His message resonated with the voters and he successfully delivered on this promise.

Arizona voters elected Justin Olson to statewide office in 2018. On the Arizona Corporation Commission, Justin has been a leading voice for protecting Arizonans' hard earned resources and expanding free markets.

In addition to his public service, Justin has served as the Chief Financial Officer for Turning Point USA, a nonprofit youth organization promoting free enterprise, limited government and fiscal responsibility. Prior work experience includes serving as the Executive Director of the Educational Freedom Institute, a Tax Manager for the Apollo Education Group, and a Research Analyst for the Arizona Tax Research Association.
‍
As Arizona's next Senator, Justin will be an unwavering voice for fiscal responsibility, low taxes, and economic growth. He will fight relentlessly for secure borders, the right to life, and the Second Amendment.

Thank you! Your submission has been received!
Oops! Something went wrong while submitting the form.
VOLUNTEER